Nobel laureate Friedrich Hayek once warned that "the economist who is only an economist is likely to become a nuisance if not a positive danger." As an economist and theorist of liberalism, Wilhelm Röpke was acutely aware of this danger. His combined commitments to sound economic analysis, the importance of social institutions, and the moral and religious framework of the Christian tradition make him a unique figure in the history of economic and social thought. This anthology, through carefully chosen selections from Röpke's writings, introduces the contemporary reader to this most humane economist and theorist of the free and virtuous society.

"Wilhelm Röpke was one of the most important economists and social philosophers of the twentieth century. This new anthology brings together selections from some of his most important books and essays .... It offers not just an excellent overview of Röpke's views on a wide variety of economic, social, and political themes, but also serves as a guidebook to better understand the public policy issues of our own times."

"This volume is a great place for students of society to start to learn about the humane economy and its relevance for the twenty-first century."

Available at the Acton Bookshop and Amazon. 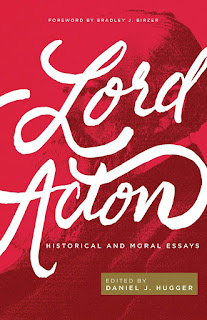 Liberty is contested because it is complex. It is not merely a concern of political science or economy, an abstract philosophical concept, or a theological doctrine. It is all those things and many things besides; it is, as Lord Acton said, “the delicate fruit of a mature civilization.” To understand this complex and contested idea, the best place to begin is with Acton himself, the foremost historian of liberty. This collection of Acton’s most important historical and moral essays introduces contemporary readers to his account of the emergence and impact of the idea of liberty.


"A new volume of essays by Lord Acton is more welcome than ever. In the present state of cultural and social disarray, his reflections on history and modernity are as perceptive and prescient today as they were over a century ago."

"Hugger has ably and, indeed, lovingly crafted a book of some of the best arguments Acton made in his life. From a philosophy of history to a history of liberty, from specific personalities to the grand movement of ideas, Acton looked at all with a Catholic and classical wisdom so often lacking in his day. We would do well to remember Acton. In so doing, we remember not just the man, but the insight of one man into a much larger and unfathomably complicated world."

-Bradley J. Birzer, from the Foreword


Available at the Acton Bookshop and Amazon.